What counselling/therapy can be, is a rehearsal for these other relationships, a space in which the fears, hopes and deeply hidden at times, desires, of the client shape and mirror their life outside of the therapy room.

Consider Sue*, in her 30s, and, after several failed relationships she has decided to enter into counselling in order to try to understand why, in her own words “she keeps choosing the wrong men.” Much of the time in therapy however is taken up with her worry I, the counsellor, will get sick of her “whining”. She worries her problems are not serious enough, or that she is not “trying hard enough”. Each week she arrives convinced I want to end the sessions.

This is a situation where the therapeutic relationship is core. Deep down Sue believes that the relationships in her past floundered because she did not try hard enough, they dismissed her feelings as whining, and eventually the relationship broke down.  Whilst it sounds like Sue understands these partners were wrong for her, the content she brings to the sessions reflects that actually she blames herself.

At times I see the role of the therapist to be a rock, over which stormy seas crash, accepting them, perhaps, imperceptibly changed by them, but still standing, unrocked by the emotional turmoil.

This is not to say I am some cold, emotionless robot. The rock is not untouched by the sea, but it does not collapse from the force of the waves, nor does it respond with its own waves.

By being the rock the therapist allows emotions which have long been held in check to be explored, experiences reevaluated, beliefs reconsidered. Take for example our hypothetical client Sue, each time she expresses her fears that she will be treated in this intimate relationship as she has been treated in others, and is proved wrong, she moves towards understanding that it was not as simple as “choosing the wrong men”. By demonstrating what a relationship looks like where she is not rejected for her feelings, eventually she is able to understand that having feelings is not wrong. Within the process of therapy even if I never directly ask “why do you think saying how you feel is whining” that question is answered.

This intimacy can be frightening, as described previous intimate relationships can be projected onto the counsellor. Sometimes the client can fight against the intimacy. This is a delicate balance for me. My heart is person centered, I follow where the client leads, but if they constantly turn away from emotional intimacy I am always faced with a choice. If we are “rehearsing” ways of being outside of the therapy room how should I respond to this rejection of intimacy? It may be that they are reacting to me as they react to those who they would be close to. However it is equally possible that they are not ready to confront the reasons why they find intimacy difficult. Egan writes of the dangers of “pushing the river” – trying to force a client in a direction they are not yet ready to go.

The title of this piece includes the L word, very deliberately, for I wonder if we did not shy away from it if describing the therapeutic relationship might not be easier. Of course not every person enters into counselling wanting to explore their relationships. They may be struggling at work, or with their identity, coming to terms with a bereavement. They still need to feel valued, respected, prized as Carl Rogers put it. The greatest exploration of what love could mean, if we removed our own biases, experiences and fears which we load upon the word comes from Erich Fromm. In the Art of Loving he discusses how as therapists, and human beings love should not be something we fear. The fear he believes comes from our false ideas of what love is- exclusionary, possessive, greedy. These false impressions are often formed by previous relationships, and brought into the therapeutic space. The rehearsal is, for Fromm, one of experiencing love as it can be. 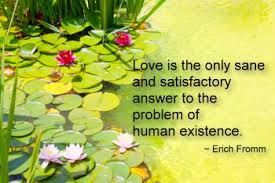 *none of the clients described here are real, rather they are hypothetical constructs used to explore ideas.